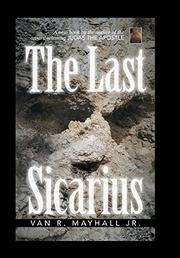 Ancient languages professor Dr. Cloe Lejeune returns to stop an evil organization from locating a cave of oil jars crucial to the survival of Christianity in Mayhall’s (Judas the Apostle, 2013) latest religious thriller.

Cloe is translating parts of an old journal that may have been written by an apostle chronicling three years in the life of Christ. The documents were found in ancient oil jars, one bequeathed by her late father and the other from the Sicarii, a group protecting a cave reputedly filled with similar jars. Pope Francis enlists Cloe to find the elusive cave, since proof of the apostle’s diary might have the power to either confirm or refute the Gospels. He also hopes to find the cave before a villainous enterprise; Cloe has already dealt with its murderous leader, the Kolektor, but he’s gone, replaced by his former servant, the Karik, as well as a mysterious heir. Cloe, her military son, J.E., and Monsignor Albert Roques join Swiss Guards in tracking down the cave. The author’s novel is rife with mystery, as Cloe’s group uncovers a myriad of clues, from tunnels in the Church of St. John in France to a burial site in Tunisia, Africa. Mystery even surrounds some of the characters, particularly Miguel, who’s trailing the Karik (and by extension, Cloe and the others) for killing his family with a bomb intended for him; the reason he’s initially a target doesn’t come to light until later. Mayhall recaps his previous novel thoroughly but nonintrusively, opening with momentum (the Sicarii facing the advancing Romans in A.D. 70) and relaying the earlier plot in snippets as the story progresses. Cloe is a commendable protagonist, more than proving her worth intellectually but also handling herself physically; she shows that a high heel can be a weapon, too. While the strongest scenes involve Cloe’s making her way to the cave using the Sicarii’s cryptic signs and biblical verses, the novel has its share of action, including a plane that goes down and a standoff with gunfire and grenades. Once again, Mayhall wraps everything up quite nicely while leaving the story open for another sequel. Reading the preceding novel isn’t a requirement, though this volume will likely inspire readers to do so.

An exhilarating companion piece to the first in the series.